The Art Treasures Exhibition, according to Roger Fry, was a turning point for the art community in Manchester because it was the first exhibition opened to the public.  Before this, it was highly difficult for any non-elite to receive admission for most artistic events.  The exhibition was originally organized to display the chronological development of British painting and sculpture.  However, due to mass political unrest throughout continental Europe, many European artists’ work was also included within the exhibition. 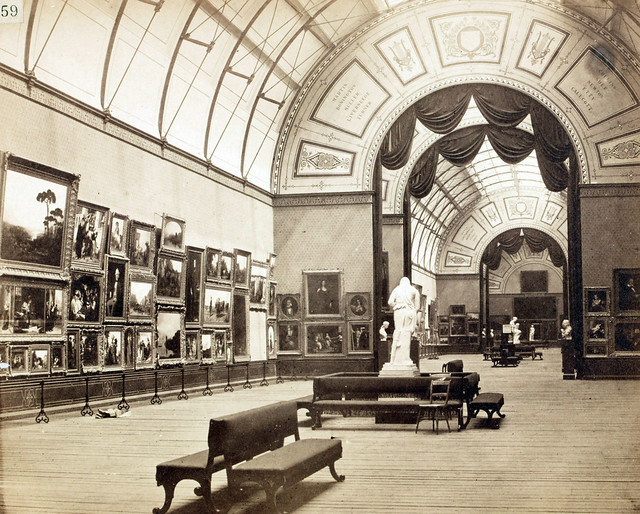 When the exhibition first opened, many elites were treating the event as a sort of fashion show, where they were only focusing on themselves rather than the art displays.  Charles Dickens recounted that the overall audience – if they were legitimately observing the art – within the exhibition seemed confused (Leahy, 549).  This event also prompted John Ruskin’s “Political Economy of Art” (published in 1857), which criticizes the targeted sociocultural audience and accessibility of art as a whole.  Ruskin’s lectures will not have been truly considered sound until the late 1800’s.  Roger Fry mentions Ruskin’s reaction to the exhibition in his “Art and Socialism,” claiming that this event was symbolic and perhaps literally the birth place of the “pseudo-artists”.

Simms, George. Exhibition of Art Treasures of the United Kingdom, Held at Manchester in 1857. Report of the Executive Committee. Manchester: n.p., 1859. Web.

Sarah Zachary is a senior English major with a Creative Writing minor. She hopes to go wherever the wind takes her, and to eventually get to California to write scripts. As an English major, she hopes that in examining Virginia Woolf, she will gain a deeper understanding of Modernism and an inspiration for her own writing style.